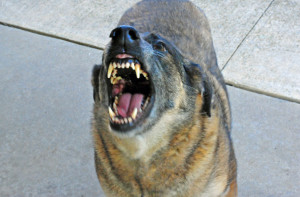 ​Every year, there are 4.5 million reported dog bites – almost half of the victims children under thirteen. To properly protect yourself and your children, it is important not only to recognize that bites occur – that even the most trusted pet can bite – but also to learn the most common reasons a dog might bite, and to recognize the warning signs. Dog bites do not occur in a vacuum. Something makes the dog feel threatened or uncomfortable, and then to lash out. Personal injury attorneys Christopher Theisen and James Roche want you to be aware of common reasons a dog might bite, listed below.

If a dog feels that something of its is being threatened, it very well may react by biting. A dog may be possessive of food, of toys, of territory, and even of humans. Therefore, dog owners must be especially careful when handling a dog’s food-dish or treat. The dog must be trained that its owner may take something, be it food or toy, without reaction.

A dog is likely to react to a frightening situation with a display of aggression. Fear can be triggered by a lightning storm, a loud noise, or a stranger. Call this one the Postman Problem. A dog may be scared by an unfamiliar presence, and act to protect itself, its family, its territory. Or, for instance, if a child were to sneak up behind a dog, in an effort at play, he may frighten the dog into a violent reaction.

Both chronic and acute pain may cause a dog to bite. Long-term pain, such as that from hip dysplasia or other chronic injury, may cause the dog to react irritably, or seemingly overreact to contact which the injury aggrandizes. Also, injurious attentions, such as hair-pulling or poking, may trigger in the dog a protective and injurious action in turn.

Be it maternal, predatory, or breeding, instinctual action can cause a dog to bite. A mother will protect her children; a dog will naturally chase a bicycle, car, or running child; a dog bred to herd will herd, nipping at heels, whether it herds sheep or young children.

The care and history of an animal play a role in its behaviors. If a dog has not been spayed/neutered, it is more likely to bite. Also, it may be more likely to bite if it has been abused or neglected. A young dog may bite too hard accidentally during play, as its bite inhibition is not yet developed.

A dog will often signal its annoyance or pain, and if an owner knows what to look out for, a bite may be seen in advance and avoided. A dog will pin its ears back, raise the hair on its neck and back, bare its teeth, lick its chops, or even scratch, bite or lick itself, prior to a bite. The dog may also act standoffish, turning away before finally provoked into an attack. We think of dogs as loyal, loving and loved. While this is often the case, dogs, however domesticated, are animals, and therefore prone to occasional unpredictable and even dangerous behavior. It is important to remember, especially in a household with children, a dog is best treated with the proper care and knowledge, lest Man’s Best Friend turn into a worst nightmare.

Is the Bark Really Worse than the Bite?
Tagged on: behavior    bite