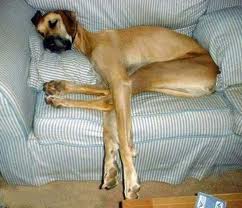 Whether you want an active dog, a doggie couch potato, or a dog that fits somewhere in between really depends on you.

Are you the type of person or family that spends a lot of time walking and hiking? If so, an active dog might be a great choice, rather than a dog couch potato. Popular breeds like Border Collies, Dalmatians, Jack Russells, and many Retrievers are well known to be high energy.

Other highly active dog breeds are:

An active dog may not be a great choice if you want a dog to just hang out on the couch with you for a couple of days at a time and watch movies, with the occasional toilet break and run around the back yard. Elderly people may also do best with less active dogs, because a dog couch potato can be easier to manage physically.

Breeds like the following tend to have lower levels of activity, and may adapt well to a less active lifestyle:

Dogs with a medium level of activity may do well if you’re the kind of person who gets off the couch for walks and errands, but doesn’t necessarily go on week-long hiking trips or plan on extensive agility training. These are part dog couch potato, part active dog breed.

All dogs need some exercise, including daily walks and a back yard. Some dogs are just more adaptable to living in a house, and don’t require excessive exercise. A true doggie couch potato is rare.

One thought on “Active Dog Breeds and Couch Potatoes”